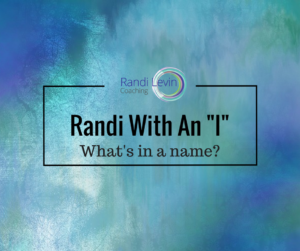 My mother always told me that I was almost named Robin. Younger me longed to be named after a bird. It seemed to me decades ago, that it would be so much easier to be Robin than to live my life spelling my first name, defending its origin, and being “different.” When I was growing up, kids would tease me by inquiring if my parents really wanted a boy and not a girl! Throughout my life, people have asked me what Randi is short for, is it a nickname, or my favorite…what is your real name? My Starbuck’s cup frequently says Brandy, my mail often says Randy, and I spell out those 5 letters on autopilot almost daily! I will never forget being out on a date in my late teens with a British guy who could not wait to tell me that in the UK, Randi with a “Y” means “horny!” We did not have a second date!

Yes, my relationship to my name has had a long and interesting ride!

Adult me is sure that without being Randi with an “I” all these years, I would not be the person I am today. Our names do on a certain level define us. They define not only who we are in written and spoken word, but they also shape who we become. That is the interesting part since we have a choice in regard to this evolution of ourselves. Think about it…why was I uncomfortable with my name growing up?

-It made me stand out.

-It was imperfect and not ordinary.

-It forced me to talk to people about the one thing that on so many levels defined me.

What kid wants to have attention drawn to them? Who does not want, at least on some level to be perfect? If I needed to explain my name, then did I also need to explain me? The circle of life is a funny thing. Fast-forward into adulthood and the very same things that gave me pause for thought growing up Randi, actually started to work for me. Why?

The answer is simple.

I let it go. I leaned into being me…not Robin but Randi with an “I.” I took the thing that set me apart and I accepted it and somewhere in that acceptance…I actually started to really, really like my name. I liked it for all the reasons that it once made me uncomfortable. I loved that it made me interesting and not ordinary. I enjoyed the banter with strangers as to how to spell my name, or why I was named Randi in the first place. I allowed it to enhance not detract from who I am.

So why am I telling you this story about my name? Simply because that same acceptance that took me from tolerating life with my first name to loving it, works for everyone in every instance. Letting go of the uncomfortable, embracing the thing that sets us apart, poking holes in what bothers us, is the easiest and most sure-fire way to take positive action in our lives. I was clearly meant to be Randi with an “I.” I often say that coaching found me in my own reinvention. I am certain that it would not have found me quite the same way as Robin that it did as Randi!

Taking a Break from This Draining Activity Could Boost Your Energy 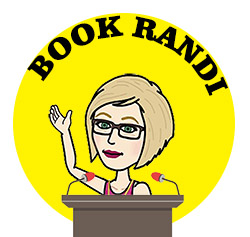