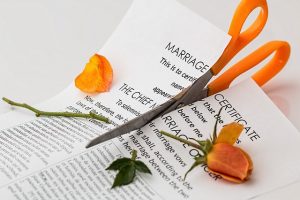 “Divorce may be a necessary ending to a traditional family unit. What no one realizes is that once the divorce is done the results of that family shift continue to repeat through each member’s life. The echo remains even though the divorce is long over.” ~ Randi Levin Coaching

My parent’s divorce took place when I was a teenager almost 4 decades ago. It impacted my relationship with them in a variety of ways, some more hurtful and dysfunctional then others. In the moment, I would get past whatever weirdness was surfacing in our abilities to relate to each other. I would get upset and then move on, never dwelling on their split, or the echo of it that followed me through life. All in all, I turned out fine–better than fine–and actually learned a thing or two about being resilient and independent in the process. Yet, even though the concept of their divorce laid dormant in my mind, and I thought I had forgiven all things divorce, what I did not anticipate was that all the emotions and changes associated with the severing of my family unit so long ago would reverberate once again upon the death of my mother last year.

When my mom passed away, along with mourning her, I somehow was also taking a journey down Divorce Memory Lane. I found myself going back in my mind through the decades. I was reprocessing the fall out of their divorce, one event at a time. Seeing it now through adult eyes, through the eyes of being a life coach, a mother, and a wife. There was no denying it. Both of my parents made decisions in the years following their divorce that forever altered their own destiny, as well as impacting mine.

My mom, upon divorcing initially saw me as “competition.” If I had a date and she did not I could see her mood shift. When I got engaged, she refused to shop for my wedding dress with me; it was too emotional for her. My dad moved 3000 miles away when I went to college. I wanted nothing more than to live with him on the west coast. Despite my applying for a transfer from an east coast school, this never happened. He had a new girlfriend and a new life…his 20-year-old daughter would not be an asset to that. He never said as much, he didn’t have to. He did not attend my college graduation because my mother was there. Eventually, he cut off my mother’s alimony, partially because he needed to, mostly to spite her. She in turn served him with back alimony papers at my wedding! (Yes, you read that correctly!)

My mom’s finances remained in disarray and we needed to help supplement her earnings. Long before she was elderly, she had become my child. Her inability to find her own way in the world post divorce had left her bitter and helpless. Instead of freeing her, her divorce had imprisoned her. We became closer when I had my children, but we were never really friends. My father lived another eleven years post divorce and my mom pushed on for thirty. In that time, neither of my parents found the happiness that they each blamed the other for not providing. They never understood that joy was an inside job.

As a reinvention coach, I cannot express enough how important it is post divorce to reconnect to and rediscover just who you are as single, independent versions of yourselves. The ability to prioritize your own adult goals is paramount to your success in moving forward. That said, the blueprint you design for your entire family and the decisions you make in how you treat each other will lay the foundation for a healthy support system or for a dysfunctional one. Divorce can bring out the worst in people and with that it can also bring out fears and insecurities. All decisions we make in life are either love or fear based. Love based decisions are filled with opportunities, positive energy and promise. Fear based decisions are filled with blocks and negativity. The goal is for family love to supersede divorce fears.

For me, my mother’s death and losing both of my parents finally closed the door on the echo of their divorce. Everyone knows that the children of divorce have a tough road post split What no one tells you is that the reverberation of just how that broken family repairs itself will continue to manifest over time. You have the CHOICE in your own family unit in how you will impact that echo. May the echo of the choices you make reflect the truest version of yourselves and one that you most want to be amplified for your own children for years to come.

Taking a Break from This Draining Activity Could Boost Your Energy